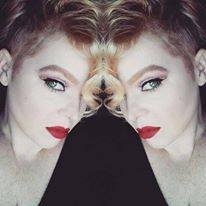 “I was diagnosed with schizoaffective disorder at age 26, it was nice to have a name for what was going on inside my head, but the stigma of mental illness follows me everywhere.
People always say “you look fine to me” but inside it’s literally like a train wreck. So many things going on at once.
I also have PTSD from childhood trauma along with anxiety and agoraphobia which has kept me a prisoner in my home for months now.

I have two dogs that saved my life on many occasions, I have been off medication for 2 years because of my delusion that they were killing me.. since then I have developed serious agoraphobia and can’t go to the doctor even if I wanted too. It’s hard to deal with that’s for sure, I couldn’t make it without the love and support of my husband and puppies So though I may not be doing well in some people’s standards, I am maintaining the best I can with the lovely support system I have.

It just goes to show that looks can be deceiving, you never know what someone has going on in their life by just looking at them. And at the other end of the spectrum, their are people afraid of me because they can’t take the time to understand that just because I’m mentally ill does not mean I’m a crazed ax-wielding murderer.
I think this page is very important, and I thank you for spreading awareness.”