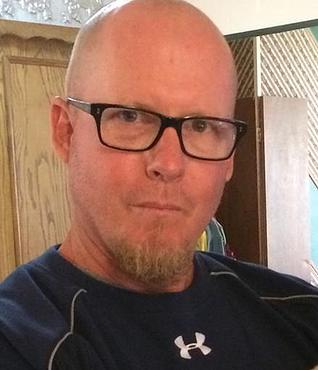 “I suffer from clinical depression and have for many years. When I was young, I knew there was something different about me. I would go through long spells where I felt off, knowing that something was wrong, but not knowing what. I would sit in class and think that I was the only one that felt that way.

As I got older, I would begin to feel desperate, to fear the future, to worry about little things, to blow things out of proportion, to lose sleep over things I had no control of, to feel lonely and sad, and to feel so down, it seemed that there was no way up. I took comfort in beer and would drink enough to help me calm down and sleep. I would often drink to excess with my friends on weekends. I thought it was part of having a good time, of being in my 20’s and fitting in, I was smart enough to know alcohol was a depressant, but I didn’t care.
Looking back I realize it was because I felt so low that I would use it as an excuse to numb myself to the perceived reality around me.
Finally in my 30’s, as my first marriage was falling apart, in large part due to self-destructive behavior, I finally reached out for help. I spoke to my doctor and was prescribed Zoloft. After a while, it began to work. The feelings of despair began to dissipate, and the anxiety that had helped provoke my fears was lessened.

For the first time in years, I felt somewhat normal and began to work on putting my marriage back together. Unfortunately, I made the mistake that many do, declared myself cured and stopped taking the medication. Things quickly fell apart again, and because of that, so did my marriage. I was soon divorced, living in a small apartment and seeing my son Peyton every other weekend. I went back to not only beer but vodka as well. I would come home and mix a strong drink to help me calm my nerves and relax, blot out my feelings and get me to sleep.
My lowest point came after a minor outpatient procedure. The procedure was on a Friday morning, and I spent the afternoon and evening in an anesthesia-induced haze. The next morning, as the last of the anesthesia, wore off, and my mind raced, I felt the most incredible psychological pain imaginable. I wept, cried and at my lowest thought about how easy it would be to stop the pain by taking all of the Ambien in my medicine cabinet. Then I thought about my son, my recently widowed father, and other family members, and knew I couldn’t. I made an appointment that Monday and renewed my prescription for Zoloft. This time, it didn’t work like before, and my doctor changed me to Cymbalta which did the job. I knew this time that depression was not temporary, but my permanent companion. Once I had my mind back in order, I got my life in order. I soon met the love of my life, Lisa, who became my wife. We had a beautiful daughter, Emmalee, bought a new house, and all seemed well. I was living the American Dream.

That all came crashing down on October 8, 2014. I received the call that Peyton, just 13, had hung himself, and he passed away five days later on the 13th. This threatened to plunge me into a darkness from which there would be no return, but this time I was ready. I had my meds adjusted, got into counseling and support, and made a conscious about not letting myself find comfort or escape in anything, be it food or alcohol, and except for a slip on the first New Year’s Eve without Peyton, I have done well, and continue to do so.

Part of my recovery meant preserving Peyton’s memory and helping others. I began #Products4Peyton and got deeply involved with the #PeytonHeartProject. Both allow me to open about Peyton’s death, mental illness, and suicide.

I talk openly and honestly about my battle with depression which was worsened considerably in October of 2104 when my 13-year-old son Peyton took his life.
I have become an advocate for suicide awareness and prevention, and ending the stigma behind mental illness. I slow lobbied here in Texas for the passage of HB 2186 which requires all school districts in Texas to provide mandatory suicide awareness and prevention training for all staff members. It was signed into law by Governor Greg Abbott in June of 2015.

Now here I am talking openly about my mental illness and encouraging others to do the same. Every day is a challenge. The fog has lifted from Peyton’s death, and I never know what will trigger the tears, sadness, or anxiety. I take my medication, talk openly about my struggles and try to help others.

I keep hoping that one day, the stigma of mental illness will be lifted, and the people suffering will be treated with the same dignity and respect that other illnesses receive. Until then, I will continue to talk and proudly proclaim “I am not ashamed of my mental illness!””