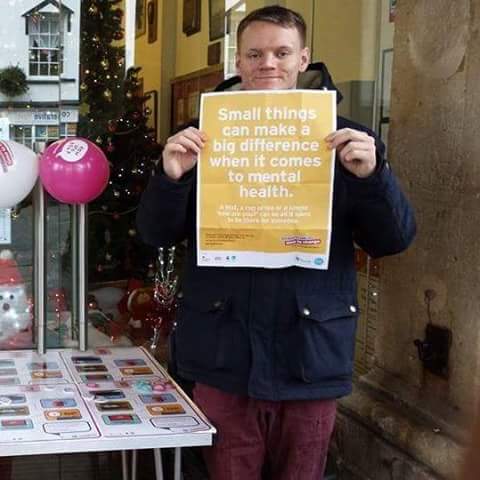 “I know how it feels, to feel alone, to feel low, to feel like you have nothing and no one. To feel so scared that you do not even leave your front door to get your basic essentials, I have felt so depressed that I have not washed or fed myself, I have cut myself (self-harm) on several occasions and even tried to commit suicide a couple of times, you feel like you are the only person in the world that feels that way.

I have both depression and anxiety to the point that I used to not leave my house because of agoraphobia, social anxiety, and panic attacks. I have been diagnosed with Bipolar and Emotionally Unstable Personality Disorder. I also suffer from Basilar Migraines.

It felt impossible for me to leave the house and do my normal day to day activities such as washing myself, feeding myself or going to the shops by myself to get the essentials and I just found it really hard to do things by myself BUT in September of 2014… I decided to start gradually leaving the house more and more and I am now a volunteer for St Margaret’s Hospice Somerset.

I currently work in the furniture shop in Chard, Somerset and I am so glad that I do. I have gained so much confidence and enthusiasm by working there, the work that the charity does is absolutely amazing. They have helped me so much to the point that I am now confident enough to work on the till, talk to customers and just feel comfortable enough to be able to do all the general shop floor work, as well as the work out the back in the stock rooms.

I spent between the age of 17 and 22 homeless, whilst homeless I was raped, I was seen as an easy target, a (usually) intoxicated young vulnerable skinny male. I was totally defenseless and I had no safe place at all.
I was raped whilst I was homeless, the first time it happened to me was in November 2011, I was 19 years old and then it happened several more times by men and women throughout my time of homelessness, I was beaten up by men a lot of times, there were usually lots of them, bigger than me and with weapons, I did not report any of this to the police at the time because I was far too scared.

I was told if I went to the police they would kill me and find where my family members live and kill them too, every time I thought about going to the police station to report any of it I would have a panic attack, pass out and when I came back round, I just wanted to block it out so I went and scored some drugs. My usual drug of choice would be upper to try to make me feel happy again like Mephedrone – MCAT or Amphetamines, Cocaine and well I guess any white powder I could get my hands on. The first chemical drug I ever took was Ketamine, I was 17 and my Grandma had passed away from Cancer around two weeks prior, I used Ketamine on and off until the age of 22. It was the one drug that would just completely make me be numb to it all and forget everything, I couldn’t feel anything physically or emotionally.

If I couldn’t score any street drugs or ‘legal highs’, I would just get some strong alcohol from the nearest corner shop. I would beg for money so that I could eat, do drugs and sleep in the local homeless night shelter (you had to pay a £1 to get in even though you were homeless) and an extra 50 pence for the use of the showers.
I feel happy to be in the world, I feel glad the people who raped me did not kill me, they could have done so many times but didn’t.
I have forgiven them not because they deserve it BUT because I do. I deserve a future, I deserve a good life, I am a good person.

I want to spend the rest of my life helping others, my future is to help others and to not dwell on the past of what has happened to me. I could and should be dead, I have had two heart attacks, one at 20 and one around a year later in the summer of 2013, the doctors said if I have a third one I will not be here. I just feel so BLESSED to still be here and be able to have the chance to help other people, I will do my best to make sure other human beings do not experience the things that I have in the past.”