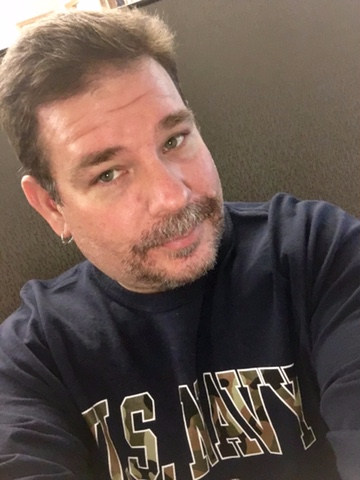 “What does living with PTSD mean to me? That’s both an easy question and a difficult one, mainly because while I could spout off a bunch of facts about what PTSD is, the symptoms, causes, treatments, and all that, it’s much more personal to someone who suffers from it.
Living with the trauma of being sexually abused when I was a young kid is something that I suppressed for about 30 years before I finally realized it was high time to reach out for help. It’s not something I ever “forgot”, but rather just pushed aside and compartmentalized so much that I managed to never consciously deal with it. The little box in the closet in my head that holds these memories were pushed to the back and then buried under decades of other memories.

I started talking to a therapist about the abuse in the late summer of 2015 and since that time we discovered that I suffer from PTSD, and with that, Dissociation, Flashbacks, Anxiety, and the Depression that comes from it all.

One of the biggest problems of living with PTSD means that I suffer from flashbacks of the trauma. They usually hit me in the mornings, and average about 5 times per week. They vary in intensity but usually last for a few minutes, presenting various memories of what transpired at the hands of the perpetrator. Sometimes the memories are so vivid and intense that they cause me to literally freeze and feel stuck, and other times they are just random visions of the room or other places that the abuse took place in.

So many people are unable to function after experiencing these events, they can be out of commission for hours, the entire day or even longer. For me, though, it’s different, I dissociate while having a flashback. So after the event is over, I am actually ok after a few minutes and I can go on about my day. In exploring why this happens, I’ve learned that my mind is protecting me and only allowing me to experience some of the trauma at a time. On top of that, I’ve learned that I dissociated while the sexual abuse events were happening to me, so now when I have a flashback, I’m dissociating within a dissociative event. Literally having traumatic memories about something I can’t even fully recall because my mind took me away while it happened.
Other parts of having PTSD means high levels at Anxiety. It’s somewhat rare for me to actually be able to relax, unwind, and enjoy life in the moment because I’m always worried about something. My mind doesn’t shut off, it’s constantly thinking about, well everything. When is the next flashback coming, why didn’t one happen today, what if something goes wrong that I can’t fix on the job? What are we going to do for a vacation this year, how will my youngest do on a big test, what if the car breaks down? You get the picture, right?

Then there’s the Dissociation, the spacing out. I do that quite often, at home, out and about, hanging out with friends, virtually anywhere or anytime. I’ll just gaze off into nowhere and then come back after a few minutes. One of the most annoying things about that is having to reread a paragraph or page of a book a couple times so I can comprehend it and retain it. Even writing this article, I will have to go back when I’m done to make sure I don’t repeat myself.

Another tough thing to deal with is Change, what an awful thing that is. I don’t adapt well to it; in fact, I pretty much can’t stand it. I like my structure and my routine, that’s when I’m most comfortable and functioning at my best. When life throws curve balls of any kind, it totally throws me for a loop. Even something as small as a friend bailing on me at the last minute and canceling plans to do something can send me spiraling down from a normal or even good state of mind, into depression within minutes. Now, think about that in the context of bigger life changes that happen and you can see how hard adapting can be at times.

Lastly, when your mind is constantly thinking, and you don’t take the time to live and enjoy life, you open yourself up to depression. The overwhelming sadness and despair can hit at any time. I get so used to my brain going 100 mph that when it finally decides it’s had enough for a while, I shut down and just do pretty much nothing but stay home and try to self-sooth. I’ll watch TV, listen to music, play my bass, read, or just lay around doing nothing.
After reading that you might wonder how I even function on a daily basis. The answer is I just kind of “do it”. I get up and go to work, and put on a happy face because I have to support myself and the kids. I keep up the façade of being ok around family and friends because I don’t want to let on what I’m really feeling; no way I’m comfortable discussing this in depth with people close to me. I run errands, go to appointments, go for walks and bike rides, and do what countless others do every day, and live life the best that I can.
The difference is that I’m waiting for the next flashback, anxiety attack, change in life, or random memory to strike that will send me into shutting down mode again. I know it’s coming; I just don’t know when.

So writing about it on my blog, opening up to social media support, educating myself, and going to therapy twice a week is how I Survive My Past. If I can understand it and learn from it, I can not only help myself but hopefully help others as well.
SurivivingMyPast.Net
Therapy Blog of a guy who lives with Dissociation, Anxiety, and PTSD as a result of childhood sexual abuse.
Twitter: @SurvivingMyPast “