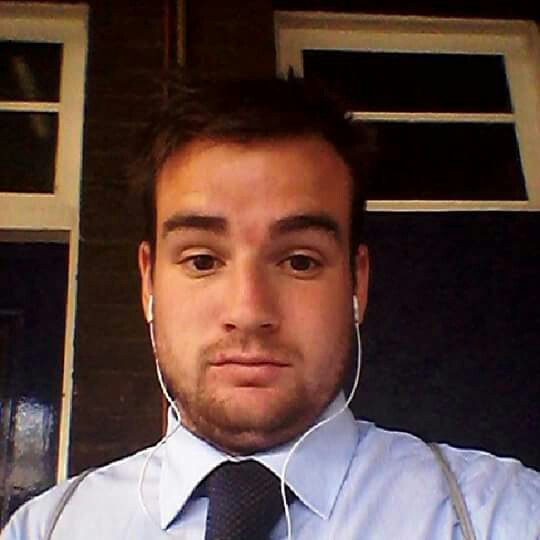 “I would like to begin my story with my father. The most hard-working man I know, he is optimism personified with a positive outlook on everything. Growing up, he was my idol but unfortunately, my sister was graced with his optimistic ways. I wasn’t.

My story begins as a 16-year old schoolboy, playing football and tennis while trying to come to terms with being gay. Peers at school were never very forgiving when it came to gay people. The only guy who was “out” was bullied beyond belief, so coming out at school was impossible. Coming out at all was impossible. My friends started chatting up girls and asking me all sorts of questions, and I had to fend them off, keeping up a charade and making sure the lies all matched. It was extremely tiring.

I did okay in my GCSE’s but my world fell apart as soon as I reached the sixth form. My sister, along with her optimism, is graced with intelligence and having seen her ace her A-Levels and easily gain a place studying Law at Cardiff University, I felt an almighty pressure to match her. The ever-present feeling of letting my parents down weighed so much on my mind, that I ended up giving in altogether.
I thought “Even if I do match my sister’s academic success, Dad will disown me for being a puff anyway.”

I ended up secluding myself. I didn’t go to school, I didn’t go to any social functions, and I gave up on the sports that I loved. I barely functioned at all. Terrified of the world outside of the four walls of my bedroom. I didn’t know a ‘mental health’ existed. I thought I was just going crazy, homosexuality being the illness I possessed and not depression.
So I left school with poor grades and no idea what the future held. By the time I had, I had turned 18 and had started going out on the town. I never had many affiliations with alcohol as a teen, but as soon as I was of legal age, I threw myself at the lifestyle. I had reached a stage where the only time I could feel anything was when I was drunk. I went from job to job, turning up in the mornings hungover and feeling worthless. Slowly but surely, I was spiraling out of control.

I ended up coming out to my parents when I was 19, drunkenly on the phone from a hospital bed in Manchester after having my stomach pumped. The reaction was great and at no point have I received any hatred from those closest to me. But it was too late to make my depression vanish.

Fast forward a year of job jumping, weekend blowouts and the occasional football match, I decided I wanted to go to university. A new start, in a brand new place, was what I felt I needed. Five days after I moved down to Brighton, (where else?!) I had a series of panic attacks and made the rash decision of quitting. My dreams of a new life, gone.
So I was back in my hometown of Bedford. No job, no education and the same four walls. I ended up back in my old job of working at the local petrol station. Night shifts followed by 13 hours of sleep, and repeat. The only two places I graced my presence with was my bedroom and till number one. I still hadn’t twigged that I might be depressed, I just thought I was lazy and pointless. I completely gave up on life altogether, crying myself to sleep when I got in from work at 6 am.

Things got progressively worse. My parents were understandably getting more and more frustrated with my lack of … well… anything. I cared but at the same time, I didn’t. I wanted someone to be there for me, but at the same time, I wanted to be alone. I had continued my drinking habits to such a degree, that on the morning of New Year’s Day 2012, I dragged my drunken self to the top of a multi-storey car park.
I never jumped. I was stopped by a policeman, but that resulted in the first of my two stays on an acute psychiatric ward (Keats Ward on Weller Wing, amazingly the very same place I work at to this day.) I checked myself out on Monday morning and went back to work with new medications and a fresh outlook on life.
I even found myself a boyfriend. I met Matt online, and after months of talking, I decided one night, at about midnight to pay £30 for the 40-minute taxi ride to Northampton to meet him. A two-year relationship blossomed from there before he moved away to university and it fizzled out. For those two years, I felt I had something to live for. I had found a new job and been promoted to management within a year, had a boyfriend and had rekindled my love for sport. Everything was falling into place.
Breaking up with Matt was inevitable as soon as he moved to Newcastle. At first, it didn’t perturb me as much as I thought it would, but learning of his untimely death in October 2014 left me wondering what could have been.
As my councillor said at a later date, I “pressed the fuck it” button. I was of the firm belief that everything was bound to go wrong so I simply let loose. Being a manager at work left me with certain responsibilities, but stealing money certainly wasn’t supposed to be one of them. I went on huge benders in London and up north, doing cocaine and partying until I crashed at lunchtime the next day, stealing more money to pay the bills. I ended up turning myself into the police due to sheer and unbridled guilt.

For weeks, I would lay in bed, wanting to sleep as dreaming became more bearable than the nightmare I was living. By this point, I felt I deserved it all after my misadventures. The future was completely black. However, I continued to drink and do drugs, as it was the only way I could feel anything at all until I reached crisis point. A ten-day stint at The Priory hospital in Barnet after another suicide attempt was the lowest point of my life.
Since then, I have worked hard to get my life back on track. I still have days or weeks when I feel exceptionally low, and I have to admit I’m still partial to a whisky or four. But a word has appeared in my vocabulary that I didn’t possess before.

Appreciation.
To be where I am now, after all that has happened, I’m lucky to be alive. I have a flat of my own, a family that still loves me despite all I put them through and friends who are my world. After all the people I hurt, however, ill I was, I am so appreciative of what I have now. My coping mechanisms, although not ideal as it basically includes sleep, works for me. Day to day, I wake up and appreciate all that I have. I write poems about the things I love in life and the beautiful memories I made with Mattie. Recovering from depression is about finding the parts of life that you love and building on them. Medication can only take you so far.

I work in mental health now, on the same acute ward I was admitted to all those years ago, with the ethos of helping other people out of the holes I once fell in. I also write a blog for the East London Foundation Trust on my time as a mental health patient and lead a quality improvement project that helps patients tap into talents. Give patients a potential future, and they feel like they have something to live for.

My experiences will live with me forever, but they have made me a better person. Hell, I couldn’t get much worse than being a thief to pay for substance misuse. If I had to give anyone suffering just one piece of advice, it would be to talk. Talk to someone. Anyone. They might just hold the key to your future.