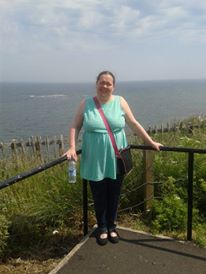 “In 2014 I was diagnosed with severe PMS otherwise known as Premenstrual Dysphoric Disorder. Here is my story.

Back in April 2006, I was sitting at my desk getting ready to start my day as a collections agent for a major credit card company. I had felt like a massive dark cloud had been hanging over me since I had opened my eyes and at my desk that morning I broke down. My colleague took me to the onsite nurse, who thankfully was in that day, and she called my GP and made an emergency appointment then she called my mum to come and collect me as I was in no fit state to be alone. My GP said “Angela, you have anxiety, stress and depression” at that moment I felt so alone, useless and scared. I was signed off work for a month at first, it soon ended up that I was off for 6 months. At that time I was with my ex and he was less than understanding, as were his mum and sister. I hardly saw him during that year as I locked myself away at home. I did no leave the house for 3 months unless it was for counselling sessions.

I was offered antidepressants and I refused. I wanted to do this myself and I finally got to the stage I was ready to fight back. My counselling soon ended and it was up to me and I was not going back to being the scared girl I had been. I forced myself to go out and a year after my initial diagnosis I was on a bus to Aberdeen, 3 hours from my home, to watch my football team play. I was back and stronger than ever and that meant some changes. I ended it with my ex and got a new job.

Fast forward to 2014, a mum of two and a wife, life was going great until I started feeling anxious from nowhere. I did have other symptoms such as insomnia, aches and pains and the likes and knew these could be linked to anxiety. My GP agreed and yet again tried to convince me to take antidepressants and again I said no as I did not like the idea of them. It was after 3 months that I noticed a pattern, linked closely to my monthly cycle. I started to keep a diary of symptoms and every month I took it to see the different doctors at my surgery and every single one of them said: “Angela it is your anxiety” and I eventually gave in and tried antidepressants. Unfortunately, 5 days in at 1 am in the morning I walked into the living room and said to my husband “I am going to jump” and ran to the window of our first floor flat. He grabbed me and sat me down and he called my mum and NHS 24 who said I was to stop taking them straight away.

2 days later my mum came with me to see the best GP at our surgery, he had been off on leave and this was the first chance I had of getting an appointment. He took one look at my diary and shook his head “Angela I am so sorry, you have severe PMS (PMDD) and I can only apologise for leaving you this long” That was all I needed to hear. A massive weight had been lifted off my shoulders and I knew I could finally move on and get my life back on track.

Since diagnosis in November 2014, I have been out the house pretty much every single day, we went on a week long family holiday last year and are going again this year plus I even went to see my favourite singer, Shane Filan, in concert in March this year too. I would never have done that 2 years previously.

Severe PMS has roughly 100 different symptoms but the ones I get are as follows:

Anxiety, headaches, hot flushes, nausea, vomiting, mood swings, backache, muscle pains, abdominal pains irregular periods, heavy periods, severe cramps, dizziness and extreme tiredness to name a few. These come on around ovulation and last until my period ends. At the moment the only thing I do it take paracetamol for the pain and get on with life the best I can. Once I am classed as old enough I will have a hysterectomy which will rid me of PMDD for good.

With regards to the anxiety my advice is simple: do not let it take over your life. Look at it as if it’s a housemate. Anxiety symptoms cannot physically hurt you even though it may feel like it!! Let it come to you and continue as normal, do not run because if you let it be there and don’t acknowledge it, the attack goes away quicker!!