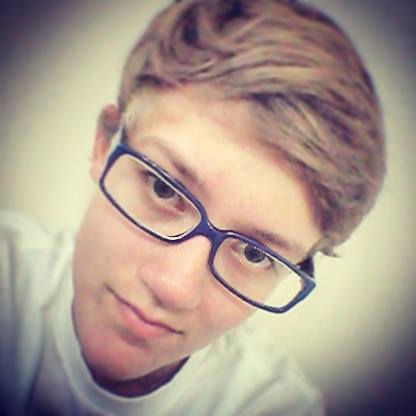 “Since I was a young kid I was bullied because I wasn’t one of the “normal” girls. I was in the small class for people who had trouble in school and people treated me like I was stupid. I got called “retarded” by many of my classmates and the principal told my mother I would never go anywhere in life. In my school, the teachers held me back and had me working at a grade 1 level up until grade 7. I wanted so badly to do more but no one let me.

When I was 12 (2010) my sister and I were taken away from our mother after she got very sick and almost died. I know it sounds bad but I was so happy. We had nothing when we lived with her. Hardly any food, no money, no car, and she hurt me mentally and physically. When we moved to Dad’s house we both grew so much. The thing I’m most proud of is that year I learned to read and write. I am able to tell you this now because of that. I am so thankful.

In 2013 I lost someone really near to me. My Nanny. I loved her and her home was the first place I knew as home, it was my home. She died of cancer, she would have been 70 that year, her first battle was when she was 21. She was the bravest and kindest woman I knew. Still is. When she died I was there, and soon after I went into a depression. Soon after we lost both of our grandparents on my mother’s side, my grandpa, and my aunt, and my little dog. My depression kept getting worst and worst as I went through high school.

In 2014-2015 I started to realize I wasn’t who I truly was and I made the decision to come out to my family as transgender FTM. I’m from a Christian family and I thought god hated me and I was going to hell, but I just couldn’t keep it in anymore. I’d known for a very long time that this is what I needed to do.

In 2015 I started cutting myself. I cut my hips so no one would see, and I started thinking about suicide. I was so close to it. I had planned it. Then my best friend helped me, with the help of my favorite teacher. I was hospitalized and put on medication. I saw a therapist who was the best man I had ever met. He helped me so much. I was clean for 6 months and then about two months ago I cut again. I didn’t know what I was doing. I felt so guilty the next day. I promised everyone I was ok and I’d never do it again and I broke my promise. Learning to love yourself is hard.
This probably isn’t the best story but I think someone might find some inspiration in it. I just want people out there to know they aren’t alone.

In September, last year I started college to become a child and youth worker. I want to help people who have been through the same stuff as me. I live for that.”

Help the page to exist; Become a patreon! https://www.patreon.com/ThisIsWhatAPersonWithMentalIllnessLooksLike?ty=h