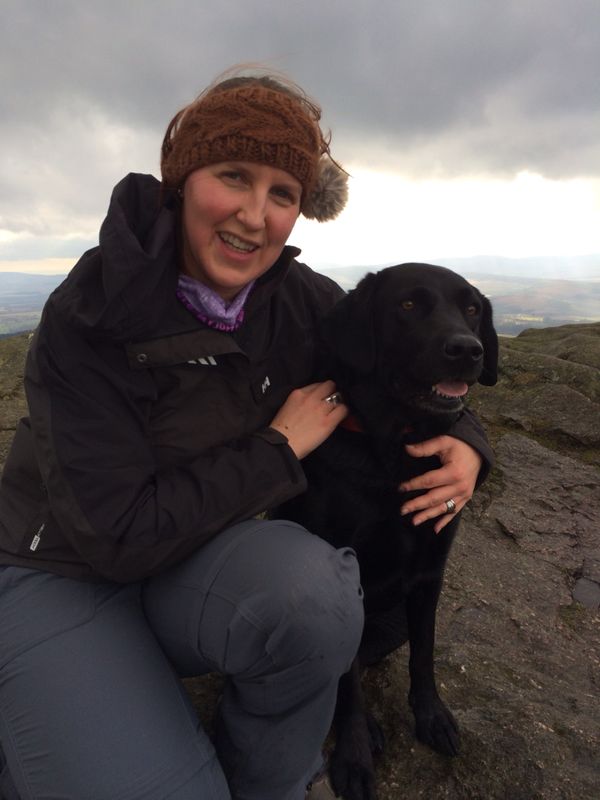 “I guess I would say I have lived with depression and anxiety since I was 12 but was only diagnosed when I was 19. It wasn’t until I was in my late 20’s that I finally hit rock bottom and I lost everything including a job relationship and even my physical health but also rebuilt my life into a much better one. That’s not to say that I don’t still have struggles.

I like to refer to the depression as my black dog which is ironic considering I now have a black lab who I got as part of my recovery process years ago.

It probably all started with my dad dying when I was 12 but the anxiety has been there for as long as I can remember even as a child. Shortly after my dad died, I started to self-harm. My teenage years were hard as I was secretly battling all these issues so education wasn’t high on my list of priorities. This led to me falling into an abusive relationship which if I’m honest almost destroyed me.

After years of fighting it and hiding my thoughts and feelings and trying to have a life like everyone else, things started to crack. By this point, I had been out of the abusive relationship and moved onto a better one and had managed to stop the self-harm.

In 2007, a letter arrived in the post, it was from my ex, my worst nightmare had happened. He had found me! This was followed by a catalogue of abuse again. Unfortunately for me, my boyfriend at the time worked away a lot which meant the door was open for my ex to spin his poison. This time I gave up, I stayed in bed in the dark for weeks and months; even my boyfriend at the time couldn’t get to me. I had shut down and let all the negative thoughts and feelings take over.

By this point, I had just stopped living and if I’m honest I just didn’t care. But somewhere deep inside, there must have been a fighter in me. I went to my GP who was super understanding and got me referred to a psychiatrist quickly who quickly released that I also had eating disorder to add to my list. I started therapy and worked on my self-esteem, confidence and my anxiety. However I couldn’t stop the self-harm, by this point, it was probably the worst it had ever been in my life.

Luckily I had a great CPN (Community Psychiatric Nurse) who was trialling a new therapy called DBT; I was sceptical at the time but it was the first time I was able to express and manage my emotions and actually helped me rebuild relationships with my mum. Finally, I could be open with her and discuss my feelings with her. This was also the time where I ended relationships and started to put myself first. I went back to college and gained some qualifications and started to enjoy life for the first time.

This led to me meeting my now husband and building a life with him, which also led to us having a little boy. I had lots of concerns during my pregnancy like how could I be a mum, what if I mess my little boy’s head up like mine or what if I pass on my illnesses. Rationally speaking I knew this was rubbish but when you live with anxiety this becomes the norm. My pregnancy was hard, a lot of my issues raised their ugly head and for the first year of my son’s life, my depression was probably not under control.

Over time it has settled it, I still have good days and bad days and my anxiety is a constant battle. For me, exercise is definitely positive and I feel like my head begins to clear and I feel much calmer. I have learnt to be mindful as I have a bad habit of worrying about the future. I used to worry every time my mood dipped and that I was going to relapse, now I realised that sometimes my black dog escapes his leash and I have to call him back. Some days my scars get me down but I remind myself they are my battle scars and without them, I probably wouldn’t be here!  I also know that sometimes it’s ok to take time out for you or to hide in bed for a few days.

I would say for anyone who is struggling, there is hope even when you feel you are in the darkest point. Keep fighting and use the support around you whether it is friends or family or even online.

For a long time I didn’t speak about these things but now I realise that by opening up can help others. This is why I started my Instagram page to express myself and help others. I am proof that you can recover, I now work with a mental health charity and support individuals to find themselves again. I have shared my story to remove the stigma after all everyone has a mental health don’t they!”

For more information on depression check out BetterHelp