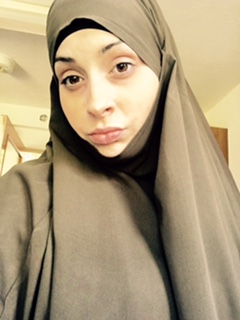 “7 weeks ago I was admitted to hospital with Psychosis and bipolar disorder. I believed that I had to sacrifice myself enable to save the world.

I was seeing a blue bird and was running towards it which each time would lead me to danger. I so badly believed I had to complete a mission. I was then admitted to A&E after an attempt of suicide. I cut of all my hair as I believed it would help keep the enemy out of my mind. I was then admitted to hospital. It was a long 7 weeks on a sectioned to a mental health hospital. I met some amazing people in the hospital with different illnesses to myself.

I’m happy to say that I’m now back on my feet sharing and spreading my story to the Muslim community to get mental health seen and heard. It’s a very taboo subject and the more we speak about it the more people will become educated on it.
When I was low I started writing my life story in a notebook it really helped me. I’m now studying and learning more about mental health. It’s something which will be with me for the rest of my life so surely it’s important I learn about it. I am now on a home treatment team which visit me weekly, they give me lots of advice and even help me get out and about for some fresh air on the days in feeling extremely low. “