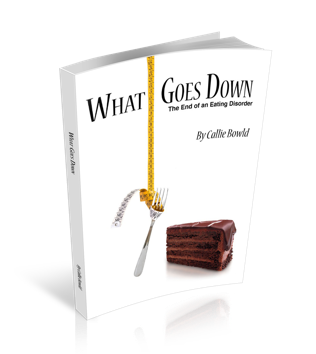 “For me, it started with a Polaroid. A lampshade. A stocky topless girl. And a Polaroid. Then, later, a traumatic Tanya Harding whack to the knees of my confidence that briefly shattered me. That was just the pinnacle moment that triggered what had already been brewing in my mind and what would continue to roar like a furnace long after I could even recall what Tanya’s club felt like. Many things had been leading up to it.

My body is, by nature, stocky, boxy, and muscular. In middle and high school, I was a gymnast. Gymnast first. Cheerleader second, but I definitely had, and will always have, the thick, toned body of a gymnast. I’m sure many of you are thinking “Well, damn, I can’t listen to her because she already has the perfect body. I’d kill for a thick, gymnast body.” Trust me, whatever your body looks like, there are probably many who would give anything to spend just one day in it. We all do it to ourselves—grass is greener, she is skinnier, he is happier. It’s just a syndrome. No matter how beautiful our bodies are, we (inside our minds) see only the flaws. Particularly that despised part. My hatred of my rotund, muscular gut began long before college.

I’m not kidding. I have an incredibly short midsection. The distance from my ribs to my pelvis (when I straighten up) is probably less than six inches. And it’s packed with muscle. If I let the avalanche go, she usually hits so hard against the table, it pushes my chair back.

But, when did I first plant my seed of hatred for my Care Bear Tummy?

It was on a choir trip.  A handful of other altos and I were hanging out in one of our hotel rooms, thinking we were a big deal sipping stolen vodka when one of the girls pulled out a Polaroid camera and fired up the stupid train:

“Ooh, naughty ones!” said another.

“Not too porney, though,” because that was a word then.

“Let’s put a lampshade on our heads!”

“Then show them to guys and see if they can tell who’s who!”

I told you, we were brilliant. But it honestly did sound kind of silly and fun. What else were we doing? Practicing our hymnals? Pssshhh! We couldn’t leave the room. We were already a little tipsy. So each of us started stripping and lining up for our first topless photo. Exciting milestone!

We all decided to put our hands over our crotches to cover them. To, you know, keep our topless lampshade photos classy. But you know what you look like when you let your shoulders slump inward and your hands drop down to your crotch. It’s almost impossible to hold good posture while your arms are reaching down toward your genitals. At least it is for me. But honestly, I was so worried about whether my little Tinker Tits were looking good, I forgot for a moment all about my monstrous belly. And you might be thinking: “Awesome! Great! You finally let that go!” You. Silly you.

Because it was this photo that would prevent me from “letting that go” for years. I didn’t even suck in. I just dropped my arms down, tried to think big titty thoughts and *snap* it was done. I was handed my token and I started waving it around in the air until the image took shape. Thankfully, the other girls were too enamored with their own photos and the lampshade process that was still going on to see my face when my body formed on the film.

“Callie, let us see!” Some of the girls started to peek over my shoulder. Silence fell.

“Are you going to show your boyfriend?” they asked.

I almost cried. Right then and there, a puddle of stupid “I’m fat and ugly” tears. But the revelation that my ugly, misshapen body was no longer just an image in my mind—it had now been proven by the hideous Polaroid in my hand to be an actual, real-life tangible object for others to see and loathe, too—caused me to knee-jerk react the same way I always do when something hurts me deeply. I made a joke about it. Tried to laugh it off. They didn’t have to know it was real if I was kidding around about it.

“I don’t think lampshades are going to be my new accessory,” I said with a weak chuckle and walked over to the vodka bottle to take as big of a sip as I could handle, hoping the girls didn’t read too much into it, that they didn’t care enough about me to want to pry any deeper.

Thankfully, it turns out, they didn’t. High school girls care primarily about very few things: how they look, how many boys like them, and how popular they are. So, focus was instantly diverted back to their photos and I pretended to look happily on while they giggled and pointed out things.

“I can tell you’re laughing in this one, Stacey. Even though I can’t see your face.”

“I can tell this is Nikki. Look at those boobs!”

But only one thought kept pounding in my mind. “I can tell they’re all girls. Pretty, skinny girls.” My confidence was shattered. None of them had my monster gut. Even the ones with small boobs, the size of mine, had dainty shoulders and small rib cages so everything still looked in proportion. I was not being overly dramatic in realizing mine was easily the worst photo. I can tell you no one asked to see mine again. And no one asked if I was going to show it to my boyfriend again. Not if I wanted to keep him, they probably thought. And I agreed.

I couldn’t wait to get away from the girls long enough to destroy that photo. But, then when I finally did find myself alone with it, later in the hotel bathroom, I found I wanted to keep it. To remind myself how hideous I was. To make sure I remembered to always suck in, always hold my shoulders back, always do anything to never look like that again. I believe that’s when the thought first formed in my mind that my body needed punishing.

My crumbled confidence wasn’t tied solely to how I looked, either. It wasn’t just because all of the other girls looked more feminine than me. It was more vague than that. I felt like, if I was so different from them in that way, I must be different in so many other ways. I must not fit in with these people. They are somehow happier, blissfully less aware, yet somehow better than me. That is a feeling that, because it is not grounded exclusively in the one shallow sector of how I look, but rather in the multi-layered complex grid of who I am—different, not like them, disconnected—it took such an instant stronghold. It is also the reason my eating disorder was able to grow and get stronger no matter how many different sizes and shapes I morphed through during the twenty years that it was in control. Because my body seemed to be the cause of this massive degradation of my confidence, it became the target of my inner anger, and my mind seemed to disconnect from it in that moment. One being in charge of the other.

Is any of that striking a chord with you?

Unfortunately this initial split, for me, ignited a furious twenty-year fight with my body. My capable, strong body. It was a horrifying show of disrespect and there was nothing my body could do to stop me from doing this to her. Other than to somehow fail. Let her throat rip open, her gut split and spew the foul contents out, her heart beat so hard and fast that it finally stops.

And, I’m grateful every day that she did not. Every single day I tortured her.

Unless you change your mind, abrupt failure that could kill or permanently disable or maim you, might be the only way your body can get her one and only message through to you: “Please stop. You’re hurting me.”

And it can very easily all start with a photo; where you think you look fat and unlovable.”

Callie wrote a book about her struggles with Anorexia, which she kindly sent me to review:

What Goes Down: The End of an Eating Disorder tells the story of Callie’s long struggle with an eating disorder – more specifically anorexia, binge-eating, bulimia and exercise-bulimia – and her road to recovery from an illness she had been battling for twenty years.

What Goes Down is a powerful story – Callie doesn’t hold back and describes her ups and downs with a shockingly raw honesty, but a surprising and uplifting sense of humour and sarcasm that makes it a pleasant read, despite the topic.

Callie’s story is important and one that needs to be shared, a story that shows that eating disorders aren’t just a phase that teenage-girls go through, but that they can affect anyone and everyone. However, as always, I would like to add that certain scenes may be found triggering and reader discretion is advised.

Callie is bold. She is also healed and inspired to help others kick the shit out of this disease, just as she did. She is you and she is also me. Callie is the name I published under as she was brave and bold enough to tell this story, to put it out there to reach and impact others. While I was not ready to become—to the rest of my professional and public world—the new face of bulimia, Callie was. And I will be forever grateful. She truly feels like a person of my past. Someone I abused and tormented for years, but she, being me, is also strong and resilient and has forgiven me. I hope her story will empower you. If so, please share it. And please let Callie know. callie.bowld@gmail.com

WHAT GOES DOWN by Callie Bowld is out now (£11.72, Amazon.co.uk), available as paperback or kindle-version on Amazon.

DISCLAIMER: I was lucky to receive a free review-copy of this book, however, my opinions are still my own.

Check out our February advertisers for some great content: Stuart and Mindses app (mindfulness & meditation)