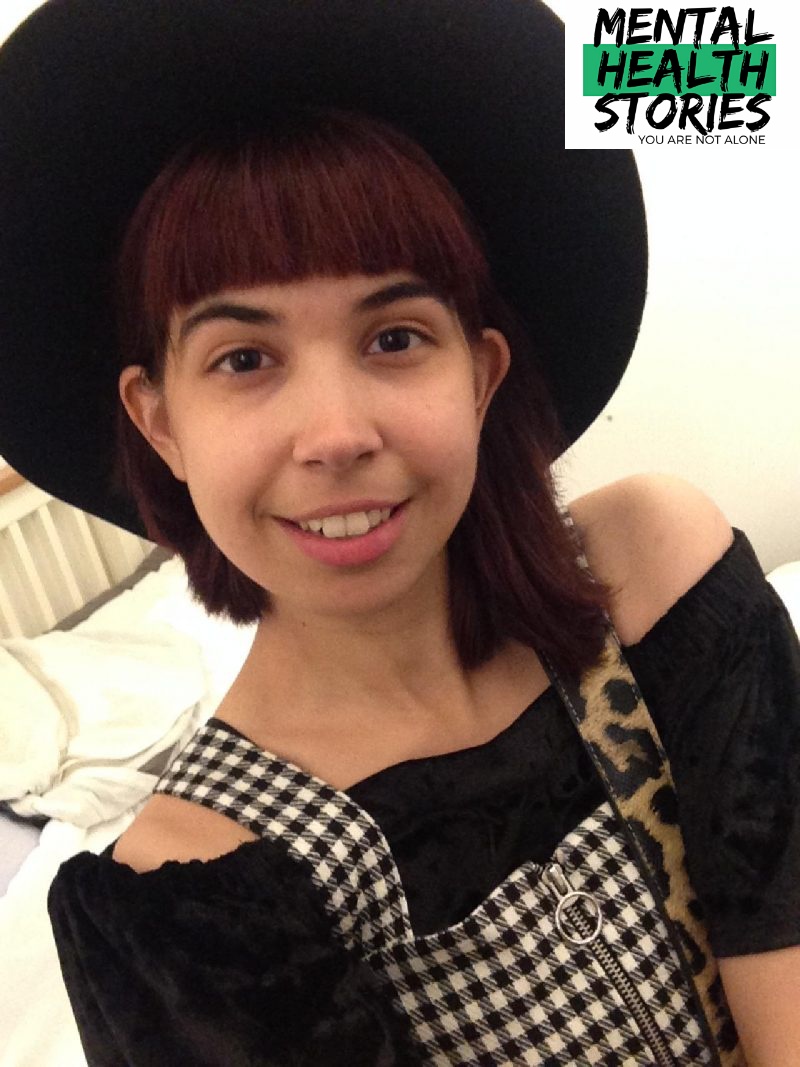 “My mental health story, like pretty much anyone else’s, began in childhood- I think most adult behaviours stem back to the things we learned about ourselves and the world when our brains were still developing. I was anxious to say the least – terrified of the lunch hall (too loud), swimming lessons (too much water), and the headmistress (too…headmistressy?). There wasn’t a lot of support for an anxious child at my first primary school, so when I finally spoke up to tell my parents I was deeply unhappy, they quickly moved me to a smaller school with far better support. I really think that kept things quiet on the psychological side for a number of years.

But things kept bubbling under the surface. My parents’ marriage was going through a rough patch – although my brother and I were protected from it for the most part. In my early teens I was settling into my first secondary school, but was placing myself under a lot of pressure to do well. I had always felt it was important to get good grades and impress other people. I think a lot of my identity was based around my academic performance. I had some casual, silly rivalries with other girls in my year, but my real enemy was myself.

Around this time, a couple of girls in my year group developed mental health conditions such as eating disorders, one of whom I was particularly close to. And of course, as you might expect from teenagers, tensions often ran high in my friendship group. It felt like there was darkness creeping in every which way. I seemed somehow less able to move on from things than many of my friends, internalising a lot of negativity. The school placed a lot of emphasis on grades and a traditional education, so the pressure just kept building. With this combination of influences, I felt like I had to be perfect, listen to every side of every story, and fix every fight or issue.

I began growing withdrawn and more secretive at around 15, regularly hiding away to cry about things I didn’t understand. I assumed and was told by multiple sources that this was all normal for teens – and I imagine plenty of it was. However, this attitude I acquired – that suffering was normal – meant I didn’t seek out help when my low moods and obsessions began to take a sinister turn.

I reckon my own experience with anorexia began when I was 16. After a routine health check all students had to take, we all started comparing weights. I had never really thought to compare myself to my friends before. I decided that I wasn’t right the way I was. It didn’t scare me, in fact I felt motivated. I started eating very plain lunches, and sucking my stomach in during gym class – which got me compliments and whispers of jealousy from some other students. I became passionate about ‘healthy eating’ and studied how models stayed thin. I didn’t believe that I was fat, but rather than I needed to improve. I just wasn’t perfect enough yet.

I moved to 6th form and the problem worsened – I packed my own lunches but threw half of it out each day. Due to the weight loss I’d already ‘achieved’, I developed some food intolerances and periods of physical illness, that resulted in an intense fear of vomiting. My diet became even more restricted (I call it my ‘beige phase’) after that! It was like a snowball effect in my head, changing all of my thoughts and pointing them towards food. When I wasn’t thinking about grades, I was thinking about food.

I developed methods of punishing myself, including excessive exercise, and as this was harder to hide I reckon this is when my mother worked out something was up. However, I didn’t seek help until university – until I had been suffering for around 5 years. The reason I finally reached out? Well, it turned out another ‘headmate’ had moved in: OCD.

My obsessive compulsive disorder began concurrently with my first sexual relationship – a thoughtless university nurse, an unnecessary pregnancy test, and other factors made me irrationally believe that any sexual contact would get me pregnant (and I believed that this would make me no longer perfect, no longer able to make the grade). Despite maintaining my relationship (which is wonderful and supportive by the way!), I descended into fears of contamination, pregnancy, illness, and premature death. I also began experiencing violent visions of the people I loved dying in horrific, Final Destination-style circumstances. I ate next to nothing on some days, and washed my hands constantly. I lost hours of each day to the bully.

In the first half of 2014, I became very ill, very quickly. Weighing less than I ever had, constantly blue with cold, and with bleeding hands all day every day, I was struggling to take part in normal life. Several close friends of the family passed away during this time, my father was ill, and I was revising for some important university exams. I was spending all day in my dorm room, shaking, unable to leave. I was overwhelmed.

This was when I reached out for help – and unfortunately my first experience other than a GP was with a university counsellor who was wholly unprepared for the complexity of what I had going on. The five sessions had no direction, and I only grew worse under her care. Luckily, a couple of months later I found someone new who was far more knowledgeable and patient. I began to work through my issues, slowly.

I went in and out of therapy, and moved back in with my mother for my final year of university – around the time my father moved out. I came to terms with the change in our family through plenty of communication, and through many, many self-help videos online. I completed my degree, very much to my own surprise, and got an internship at a magazine.

My treatment has taken several years of self-help, 2 rounds of CBT, and medication to get me to where I am now. It took around 2 years to get back to a semi-healthy weight (and to finally be able to eat cheese again!), although it does still fluctuate and I’m always working on it.

But now, over 10 years since my mental illness began, I am able to hold down a job, and am getting married next year! I have experienced relapse in the last year and have no doubt it will happen again, but I am armed with so much more to cope nowadays. From meditation, to reframing negative thoughts, to diary-keeping, I have so much I can do to keep myself on an even keel. I am looking forward to improving even more in the coming years, hopefully with some more therapy to help me get there.

And more than anything, I am hoping to help young people who are confused and overwhelmed by their brains, like I was. I illustrate stories for children and am working on my very own self help/memoir, which I am very much hoping to get published.

If you’d like to connect with me, and be bombarded with lilac and pink (my faves) artwork and photos filled with inspiration and magic and things like that, I’d love you to check out my site, and my  Twitter and Instagram. I look forward to connecting and supporting each other!”

Check out our May advertisers for some great content: Stuart